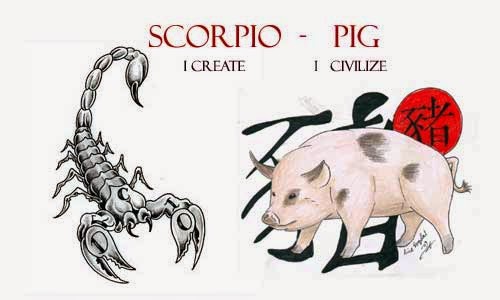 In his book Animal Farm, George Orwell writes in jest that “all pigs are created equal... but some are more equal than others.” The Scorpio Pig possesses natural magnificence. She’s duskier than most. Scorpio has just what the doctor ordered to remedy that silly piggie credulity: suspicion. It’s a good match. This person will surely go a long way in life. Moreover, he or she will be cheered along by many admiring companions.

Often, Scorpios born in Pig years are exceptionally good-looking. They have an enigmatic quality that other more direct Pigs would envy. What’s more, Scorpio Pigs know how to dress. Both signs have a taste for the sensually appealing. Watch for elegant décolletages and spiffy smoking jackets.

I’d rather not have to say it, but our friend the Scorpio born Pig can be both mouthy and pushy. This guy knows what she wants and never hesitates to play the squeaky wheel in order to get it. She can be loud and boisterous. She loves jokes and off-color stories. The Scorpio born Pig is lusty. In her younger years she can be accused of sowing rather more than her share of wild oats.

The reason for her aggressive dynamism is Scorpio Pig’s raw ambition. These people don’t like to be poor. They struggle very hard in order to impose their ideas in work situations. They are not afraid to ring up the director of the Metropolitan Museum of Art in New York from some obscure boondock to say that they are the best painter in Illinois—maybe in the whole world—and they think the curator should give them a one-man show. Oddly, sometimes these forward tactics work, and work very well. In any case, the Scorpio Pig will try anything once in order to advance her own interest.

The Scorpio Pig is less pure than other Pigs. He or she will know how to flimflam and will be tempted to do so for the basest material ends. Unfortunately, the Pig character is deeply affected by improbity. A touch of dishonesty can be disastrous for a Scorpio Pig. She does not bounce back from crooked deals. She does not handle guilt very well. Best the Scorpio Pig stay away from trickery. If she asks for trouble, she usually gets it.

Every gesture of the Scorpio Pig, even if it is an invitation or a kindness, is selfinterested. This person is not evil, but he is very desirous of getting where he wants to be. He’s ruthless, in fact. His parties may be spectacular and his gifts lavish. But there will always be a tinge of egotism connected to them. Maybe he needs a phone number for car repair or perhaps you know a guy who might hire his daughter. Scorpio Pigs cannot seem to give just for the sake of giving.

This person’s capacity for self-righteous anger is monumental. Scorpio has never been noted for self-control. But a Scorpio born in a Pig year—my dear! If you happen to see one of these creatures winding up for a rip-roaring tantrum, batten the hatches and run for your life. Scorpio/Pig anger is murderous—but infrequent. All in all, the Scorpio/Pig is quite a jolly, attractive sort. He is strong-willed, loving and able to compromise—for gain. He hates to lose and rarely does. He can be narrow-minded and conservative, but he’s fun to be with and knows how to cut a mean figure in public.


In all areas where the Scorpio born Pig performs, he does his best. But he is a tinge on the selfish side. And he or she will be demanding. Thing is, these people are very bright and funny. They are also pretty to look at. They adore sex and everything that goes before it and after it. They’re demonically fetching. They will love deeply and exclusively.

Should you be enchanted by one of these Scorpios, I would suggest that you never arouse their jealousy. Like their rages, their attacks of green-eyed monsterism are epic. Scorpio/Pigs like to be adored and hate being taken for granted. They play with the emotions of whomever they are with, but they cannot accept being toyed with in their turn. It’s a ticklish route being in love with a Scorpio/Pig. Ask Louis XVI: Marie Antoinette was one of these characters.


Decor in the Scorpio/Pig’s life is a must. Home is one of the outward and visible signs of his achievement. The prospect of building a real home where each room, each objet d'art and every last cranny will bespeak the person who inhabits it is delightful to the domesticated Scorpio/Pig. The furniture will usually be traditional, the monogrammed linens ironed fresh and fashioned from finest imported fabrics. The Scorpio/Pig makes much of his or her home. He is handy and clever and skillful at building and decorating. Scorpio/Pigs love to throw lavish receptions and invite all the “right” people.

Parenting also pleases the Scorpio/Pig. He or she will most likely be bossy and even domineering as a parent. But they will love their kids with a passion. For the Scorpio/Pig, each offspring represents another feather in his cap. This is a proud and demanding parent who compensates for being overly authoritarian by dispensing impressive amounts of tenderness and loving care to children. The Scorpio/Pig spends time with kids, but has a bit of trouble accepting adolescents. His self-assurance is threatened by the questioning attitude of teenagers. He wants to be obeyed—and never disapproved of.

The Scorpio/Pig child is a pleasure. First of all, he or she will surely be beautiful. Secondly, these kids have enormous giggling capabilities and love to wallow in the lushness of childhood’s joys. Take your Scorpio/Pig child to the country and let him skinny-dip. He will enjoy lolling in the tall grass after his swim. Infrequent (but impressive) tantrums aside, this is a sweet child who asks little more of his young life than loving parents and a safe home.


This person’s job will be the vehicle by which he rises to success. The Scorpio/Pig person is not interested in modest wages and lifelong security. He cares about getting to the top, having lots of money and living in opulent surroundings. He’s a driver and a doer. Early in his career this person will have some difficulty obtaining top-level positions. He will represent a threat to other executives and his angry side can also cause problems. When the Scorpio/Pig learns to tone down and cool it with the ambition act, people will be less anxious about according him jobs involving authority. In any case, by middle age, these people are usually rich. It comes with the territory.

Bossy. Yes. But humane all the same, and so creative that sometimes the bossiness is understandable. Scorpio/Pig wants to get things done. He’s impatient and can be rowdy. Whether boss, employee or independent worker, this person will have success or die trying.