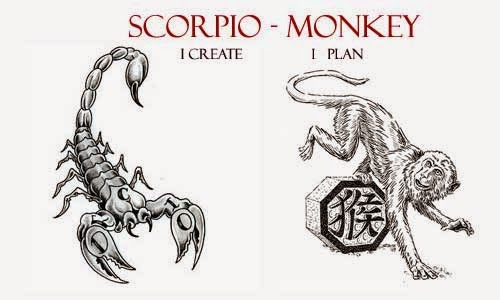 Combining plotting and creativity can cause some human fireworks. The Scorpio born in a Monkey year will bear all the earmarks of the complex Scorpio nature. She will be crafty and enigmatic and harsh-tongued and strong. Yet she will seek to muffle those darker characteristics by pretending jauntiness and affecting a slightly silly attitude at times. Monkey and Scorpio can sometimes be—but only sometimes—allies. They are both tricky and ruseful. They are both capable of leadership. At other times, however, these two signs are at odds. Monkeys are sometimes deceitful but they pretend they are only kidding around. Scorpio is hardly ever just fooling around. Scorpio means business. Monkeys are builders. Scorpios can be destroyers. Monkeys are zealous, Scorpios jealous.

So inner discord is no stranger to the Scorpio born Monkey. There is a veritable storm of conflicting emotion at play inside this person’s pretty little cranium. “Should I just lie back and let someone else do the work and consider myself the brains behind this operation?” asks the devious Scorpio of his Monkey conscience. “Or...” pipes up the Monkey, fair and square, “how about if I not only think up the plan, but I go and do it, too, and everybody will see what an industrious little worker I am.” Either way the work gets accomplished, the plan is hatched and the battle done. But the method may leave a bitter taste in our hero’s mouth.

She’s often dissatisfied by her own imperfections. She’d like to be able to gaze long and hard into the mirror and say, “I am an accomplished something-or-other and I am proud of it.” Instead, her reflection often comes back a disappointing mosaic of “maybe next time,” and “if only,” and “try harder.” This shattered view is unpleasant to the Scorpio Monkey. Yet she is hard put to fight her dualities fiercely enough to focus the image.

The Scorpio Monkey is quick-witted and lively. Tying her down will not change her basic desire to come and go at will, to detour if she wants and to find her proper path by attempting many divergent ones. She is basically self-interested, wants recognition for her achievements alone, and finds sharing the burdens of less capable and imaginative souls untenable. The Monkey will lead. She will shine, and she will triumph. But first she has to get that temptress Scorpio out of her system. The Monkey born Scorpio aspires to great heights of creativity. She is capable of undertaking and accomplishing projects of real complexity and import. The Monkey alone is a remarkably temperate soul. So the Scorpio side of this character gives inspiration and draws her into wilder territories than most Monkey people ever frequent.

At first she may balk and feel slightly tipsy from the journey and the rarefied air. But wait until she gets his little Monkey paws busy; this person adapts instantly to new circumstances once she’s found a project to zero in on.

You may find this creature slightly bumptious and too talkative for your taste. Some Scorpio Monkeys seem to have a scratched phonograph inside their heads and will endlessly repeat stories you have already heard a hundred times before. They need to be reminded of their hyperblabbiness. Fortunately, they take criticism with a smile. For Scorpios these people are practically without sulk. They may be anxious and wracked with self-doubt. But Scorpio Monkeys will prevail. It’s in their nature.


This person is no ordinary hypersexy Scorpio. He or she is also an erotically active Monkey. The combination of the two very sexual signs makes for an energetic if somewhat preoccupied lover. The Scorpio/Monkey wants to be exalted, exhilarated and excited. He or she will have no time for lukewarm affairs and is mainly interested in long-term and long-winded love matches.

It is not as important to admire the Scorpio/Monkey as it is to remember that his or her sexual needs take precedence over almost anything else. Some people say that sex tires them, wears them out and drains them. Not the Scorpio/Monkey. For him, sexual activity imparts self-confidence, builds his sometimes worried ego and energizes his creativity center. If you love such an eager beaver, don’t underestimate his or her needs in bed or you may be sitting home by the phone doing crossword puzzles while the Scorpio/Monkey races about thrill-seeking. Don’t ever tie this person down. Urge him or her to take trips without you. Often the illusion of freedom is enough to keep the Scorpio/Monkey down on the farm forever.


The Monkey born Scorpio would rather have three funky houses than one palace. He’s one of the roving kind. His walls will be plastered with souvenirs and mementos of travels and vacations in exotic places. His piano usually has the cover sawed off and he may drive a perfectly frightful car. For this person, chic is definitely out. Monkey Scorpio considers that decor should be functional and personalized.

All Scorpio/Monkeys should have kids. There’s a Peter Pan quality in this character. The Scorpio/Monkey likes to teach his or her children and to delight them with jokes and join in their pranks. The Monkey born Scorpio also feels lightness and innocence emanating from children, and this attracts and fascinates him. He may try to be authoritarian, but he’ll probably giggle right in the middle of his somber lecture on table manners.

The Scorpio/Monkey child will be troubled if he or she doesn’t succeed right away in life. There is great sensitivity here, and emotion takes longer to grow up than does intellect. The best advice I can give the parent of this child is: Leave him or her alone until a definite direction can be discerned. Then, leap at the chance to allow your Scorpio/Monkey to learn everything she will need to know about what interests her. This kid needs encouragement, freedom of action and a sterling example to follow.


The Scorpio/Monkey’s talents often lie in creative areas, but he or she is also capable of excellent interpretive work. They can be good storytellers, as they like to talk and have orderly intellects. This person works best in small groups, where his or her artistic qualities are appreciated and implemented by the other members of the group. Again, in the profession chosen, this person must have the impression of leeway or breadth of action in order best to utilize talent. They can be short-tempered when pushed on deadlines or anxious about the success of the project.

Frankly, I don’t think the Scorpio/Monkey wants to be boss. This person seeks, above all, an independent means to work on what interests him most. Being in a position of authority imposes strictures on the Scorpio/Monkey that he considers more of a prison than a privilege. He can be a diligent employee so long as he is not forced into excessive routine or the compromise of ideas. You’ll find this person most happily employed doing his or her own thing. The Scorpio/Monkey is an original. Fitting in is not one of his goals.