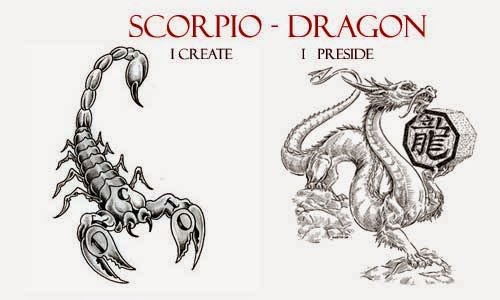 When you add Dragon to Scorpio and mix well to blend, the batter thickens. Scorpio lends mystery and ruthlessness to an already plucky and boastful Dragon nature. Add a dash of swagger and some good old Scorpio vengeance and jealousy and you will concoct yourself a mighty baroque human being. This dish is spicy and copious.

Seriously, the Scorpio Dragon is a Dragon’s Dragon and a Scorpio’s Scorpio. All of the characteristics of each sign are magnified by their amalgamation. This person is ambitious. She will have masses of personal charm and will know how to go after what she wants. They see no reason why they cannot be head of the world if they so choose.

Scorpio Dragon holds his scaly green head up so high that he can peer directly over the mountain at the lush green valley of his success. Often, however, his eyes are bigger than his stomach. The mountain he must cross presents him with innumerable insuperables. Trudging from obstacle to obstacle with your pride in your front paws can be discouraging. Scorpio Dragons have been known to give up. But mostly they bounce back and, like the phoenix, rise from the ashes of their own funeral pyre to strike again.

Scorpio Dragons come on strong, and have gigantic reserves of courage and cunning. They want to get places in life. They are combative and charming. But their giant pitfall is that they want to be paid homage as well. Modern life is difficult for these haughty creatures. The Scorpio born Dragon has a
hard time with moderation. He is drawn to excess and self-indulgence and has a tough time resisting the dissipation of his or her talents.

Magnetism is indeed a fabulous trump card in the game of life. But it is not quite sufficient to ensure either success or happiness. Some warmth, pith and density must be incorporated very early on in the preparative stages of this person’s life. He must not get carried away from basics and then one day find himself standing naked and frightened atop his mountain—alone!

The Scorpio Dragon may seem invincible, but she’s still a Dragon and she’s sentimental. Deep down she weeps over stories about lost dogs. She’s a pushover and a soft touch. Perhaps that’s why she seems stone-facedly to have no sense of humor. She doesn’t want to show his hand.

Scorpios born in Dragon years are strongly individualistic. They have plenty of imagination and can think up a hundred new schemes a minute. People automatically like them and even agree to take them in and feed them and care for them because of their unusualness. Thing is, the Scorpio Dragon is not always cooperative and sometimes gets asked to leave after only a few days. Why? Because in their struggle for singularity, these people often alienate the very plain folks they need most by
snubbing them or simply ignoring their needs. It doesn’t hurt a Scorpio Dragon to help with the dishes. But it somehow doesn’t occur to him or her that such lowly tasks exist. I’m not suggesting that the Scorpio Dragon is a snob. He’s just oblivious to simplicity.


You cannot expect this passionate fanatic to cool his ardor anywhere—especially in the bedroom. The Scorpio/Dragon is adorable and knows how tempting he seems to potential lovers and mistresses. But sometimes, just to be perverse, he will be faithful in the extreme to a single and wonderful person who knows just how to applaud the Scorpio Dragon while twisting his earlobe to make him behave.
Scorpio Dragons like to think they are sexually free. If you love one of these interesting and irresistible characters, I advise you to give her lots of space to roam about, lots of liberty and the distinct impression you couldn’t care less whom she gets involved with. Such a casual attitude will keep her close to home. Your apparent indifference will serve as a challenge to her. Scorpio Dragons are predictably jealous.


The Scorpio Dragon likes a comfortable home, but he’s not one to putter about clipping the hedges and evening out the flowerbeds. Scorpio/Dragons don’t see the need for excessive nit-picking in decoration. They like clean lines and surfaces on which to work and/or receive their multitudes of guests. They impress as much with their presence as with their interior, so they often don't make much of the latter.

The Scorpio/Dragon child is indestructibly perky. You will want to take him or her home with you. They smile and giggle and coo and sing little songs to charm and win attention. They can be sulky, too. But nonetheless you will be hard put not to spoil this little tyke. If you resist the temptation to shower him or her with admiration and worship, this kid will have a chance to learn humility. A measure of modesty learned early on will be money in the bank for this prideful darling.


The Scorpio Dragon career is often pockmarked with minifailures. I don’t want to sound discouraging, but the Scorpio/Dragon person has more fervor than he does perseverance, and sometimes expects too much in return for the effort exerted. In order to prosper, this person must first learn to hold his emotional tongue and not consider anything gained until all the bets are in. He will benefit from a solid classical education, against which he will probably rebel. Find that person who knows how to twist earlobes so lovingly and put him or her on the case.

This subject wants power over others. It does not, however come easily. Conferring authority on one so self-enraptured is tricky and dangerous. As a boss, this person could be perfectly heinous. As an employee with an impressive title, the  Scorpio/Dragon and his coworkers are better off. Watch him or her for streaks of lording it over others. Keep the Scorpio/Dragon busy and insist he apply his fine imagination to getting concrete results. A happy Scorpio/Dragon is an occupied one. scorpio dragon zodiac horoscope