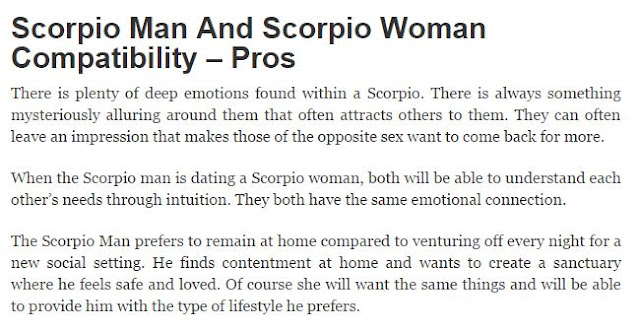 There is plenty of deep emotions found within a Scorpio. There is always something mysteriously alluring around them that often attracts others to them. They can often leave an impression that makes those of the opposite sex want to come back for more.

When the Scorpio man is dating a Scorpio woman, both will be able to understand each other’s needs through intuition. They both have the same emotional connection.

The Scorpio Man prefers to remain at home compared to venturing off every night for a new social setting. He finds contentment at home and wants to create a sanctuary where he feels safe and loved. Of course she will want the same things and will be able to provide him with the type of lifestyle he prefers. 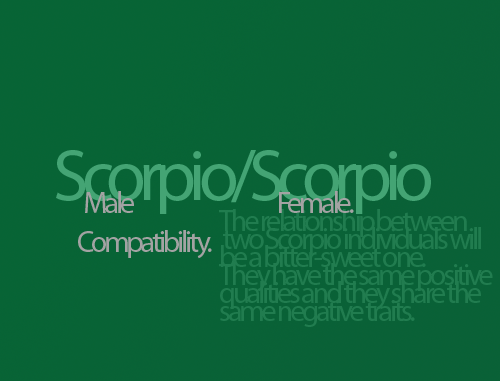 The relationship between two Scorpio individuals will be a bitter-sweet one. They have the same positive qualities and they share the same negative traits.

The Scorpio Man Scorpio Woman have the potential to create a loving relationship. They are both able to understand each other on an emotional level that most in the Zodiac can’t even start to comprehend. They have the ability to communicate without words and will be able to tell what the other one is feeling.

Their greatest strength will be in the bedroom where they are bound to create a very large family. If these two Scorpios can overcome their main flaws then they will have nothing holding them back from a long lasting relationship. 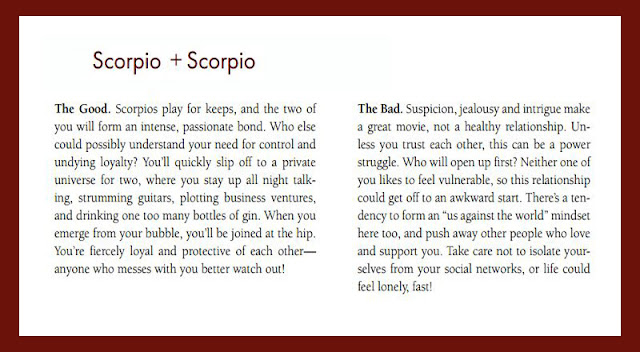 The Good. Scorpios play for keeps, and the two of
you will form an intense, passionate bond. Who else
could possibly understand your need for control and
undying loyalty? You’ll quickly slip off to a private
universe for two, where you stay up all night talking,
strumming guitars, plotting business ventures,
and drinking one too many bottles of gin. When you
emerge from your bubble, you’ll be joined at the hip.
You’re fiercely loyal and protective of each other—
anyone who messes with you better watch out!

The Bad. Suspicion, jealousy and intrigue make
a great movie, not a healthy relationship. Unless
you trust each other, this can be a power
struggle. Who will open up first? Neither one of
you likes to feel vulnerable, so this relationship
could get off to an awkward start. There’s a tendency
to form an “us against the world” mindset
here too, and push away other people who love
and support you. Take care not to isolate yourselves
from your social networks, or life could
feel lonely, fast! 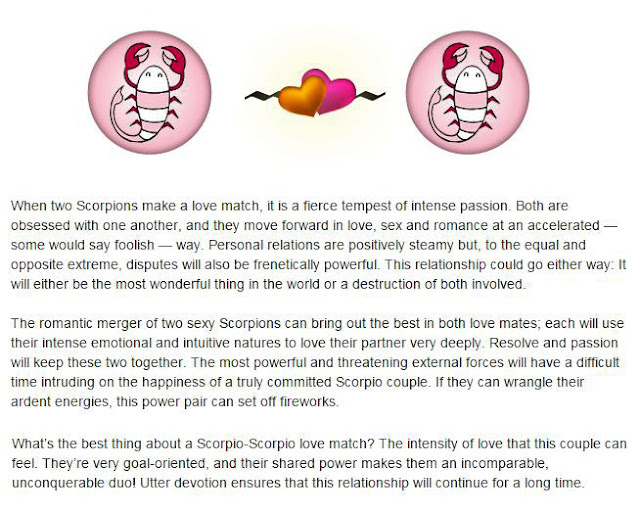 When two Scorpions make a love match, it is a fierce tempest of intense passion. Both are obsessed with one another, and they move forward in love, sex and romance at an accelerated — some would say foolish — way. Personal relations are positively steamy but, to the equal and opposite extreme, disputes will also be frenetically powerful. This relationship could go either way: It will either be the most wonderful thing in the world or a destruction of both involved.

The romantic merger of two sexy Scorpions can bring out the best in both love mates; each will use their intense emotional and intuitive natures to love their partner very deeply. Resolve and passion will keep these two together. The most powerful and threatening external forces will have a difficult time intruding on the happiness of a truly committed Scorpio couple. If they can wrangle their ardent energies, this power pair can set off fireworks.

What’s the best thing about a Scorpio-Scorpio love match? The intensity of love that this couple can feel. They’re very goal-oriented, and their shared power makes them an incomparable, unconquerable duo! Utter devotion ensures that this relationship will continue for a long time. 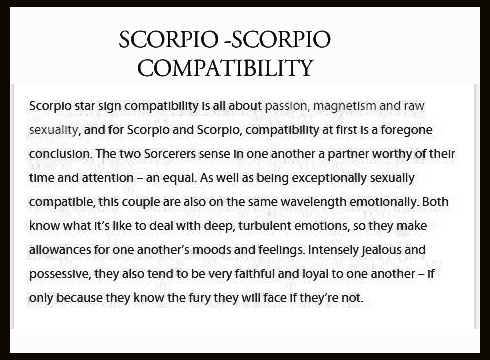 Scorpio star sign compatibility is all about passion, magnetism and raw sexuality, and for Scorpio and Scorpio, compatibility at first is a foregone conclusion. The two Sorcerers sense in one another a partner worthy of their time and attention – an equal. As well as being exceptionally sexually compatible, this couple are also on the same wavelength emotionally. Both know what it’s like to deal with deep, turbulent emotions, so they make allowances for one another’s moods and feelings. Intensely jealous and possessive, they also tend to be very faithful and loyal to one another – if only because they know the fury they will face if they’re not. 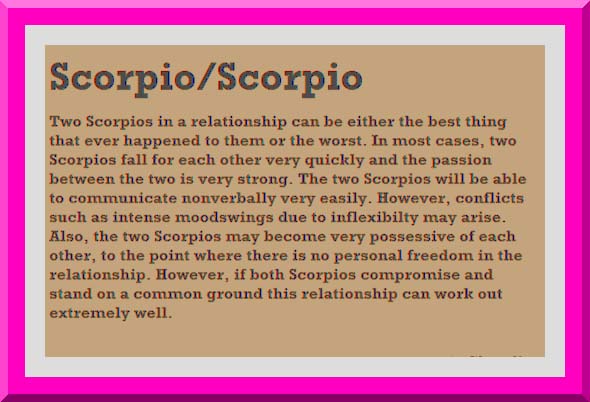 Two Scorpios in a relationship can be either the best thing that ever happened to them, or the worst. In most cases, two Scorpios fall for each other very quickly and the passion between them is very strong. The two Scorpios will be able to communicate non-verbally very easily. However, conflicts such as intense moodswings due to inflexibility may arise. Also, the two Scorpios may become very possessive of each other, to the point where there is no personal freedom in the relationship. However, if both Scorpios compromise and stand on a common ground, this relationship can work out extremely well. 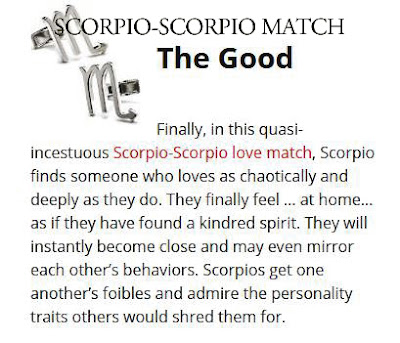 Finally, in this quasi-incestuous Scorpio-Scorpio love match, Scorpio finds someone who loves as chaotically and deeply as they do. They finally feel .....  at home.. as if they have found a kindred spirit. They will instantly become close and may even mirror each other's behaviours. Scorpios get one another's foibles and admire the personality traits others would shred them for. 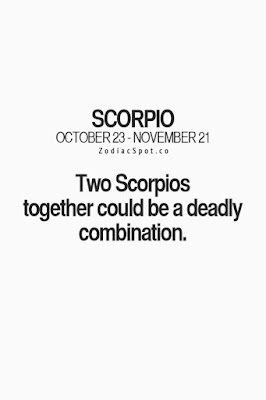 Two Scorpios together could be a deadly combination. 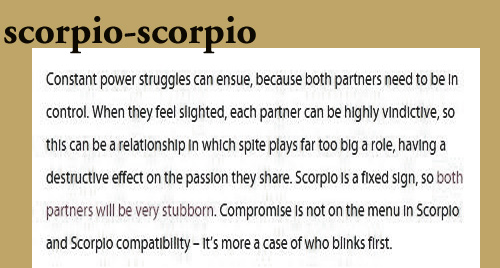 Constant power struggles can ensue, because both partners need to be in control. When they feel slighted, each partner can be highly vindictive, so this can be a relationship in which spite plays far too big a role, having a destructive effect on the passion they share. Scorpio is a fixed sign, so both partners will be very stubborn. Compromise is not on the menu in Scorpio and Scorpio compatibility – it’s more a case of who blinks first.