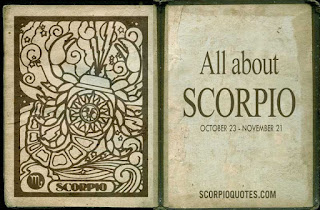 source: the only astrology book you’ll ever need by Joanna Woolfolk

This is the sign of extremes. Scorpio people are variously described as powerful, weak, independent, clinging, passionate, and cold. Clearly, Scorpios are a bundle of contradictions encompassing the best and worst in human nature. The key to Scorpio personality is intensity. Scorpios do nothing by half-measures. Magnetic, emotional, capable of exerting tremendous force, Scorpio's strength is hidden in the depths. In the sign of Scorpio the element of water is fixed, an image that suggests an iceberg or a bottomless well.

Scorpio may appear impassive, sometimes unapproachable, but turbulent passions are always boiling underneath, invisible on the surface. Scorpio lives on many levels. While Scorpio presents a calm and smiling face to the world, they are ferociously persistent and extremely strong-willed. Scorpio is also flexible when it comes to working out solutions. When thwarted, Scorpio doesn’t just accept defeat. They are extremely agile when it comes to sidestepping obstacles and figuring out a dozen new ways to get to their goal. In a wonderful paradox, flexibility is one of Scorpio's most effective methods of controlling situations.

Scorpio is the most misunderstood sign in the zodiac because of its complications and convolutions. Basically, Scorpio always have a hidden agenda. They are someone of incredible depth and brilliance, and Scorpio's inner psyche is a labyrinth of wheels within wheels, boxes within boxes. Even when Scorpio seems to be at ease and relaxed, they are always evaluating, figuring out their moves, working out strategy. Much of this has to do with control, which is what Scorpio is all about. For Scorpio, to be out of control is to be in psychic danger. Nothing is worse for them than to feel swept away by outside forces. When they control, they are safe.

Scorpio's evolution is the journey toward controlling in positive ways - putting order into chaotic situations, being of use to others and therefore meeting an unfulfilled need, arranging their personal environment so it works smoothly for them. The unevolved Scorpio tries to control other people and manipulate situations for their own greed. Thus, as you see, the forces of light and dark continually oppose each other in Scorpio's turbulent psyche.

What Scorpios need is to transmute their fervor into positive relationships and meaningful work. It is very easy to waste themselves on what is unworthy, and then their feelings turn inward, become imprisoned, at times even destructive. More than natives of any other zodiac sign, Scorpios live at a high pitch of emotion. Its negative aspects are brooding, jealousy, resentment, even vengefulness. The positive aspect is Scorpio's unswerving dedication once their emotions are engaged. The Scorpion energy, drive, and endurance are legend. Above all, Scorpios seek to give their lives a meaningful pattern, to find a deeper purpose.

Scorpios have a philosophical turn of mind and may become interested in religion and the occult. Scorpio's sixth sense enables them to intuit things before they happen. They are blessed with a native understanding of the human heart and a great awareness of life’s secrets. All the water signs (Cancer, Scorpio, Pisces) tend to be psychic, but Scorpios delve into the powers of the mind that others are afraid of. This is the zodiacal sign of birth, sex, death, and regeneration—areas of human existence in which a person confronts the mysteries of the universe. Many Scorpio natives are brilliant doctors, surgeons, scientists, and spiritual leaders. Jonas Salk, Christiaan Barnard, Marie Curie, and Martin Luther are among them. The complexity of the Scorpio mind makes it difficult for them to skim the surface; they must uncover what lies beneath. Whether the Scorpio is studying a new subject, learning a language, hunting down a fact, or just reading for amusement,there is a quality of penetration in the way their mind works.

Scorpio's finest attributes - and their worst - are revealed in relationships. With Scorpio, relationships are usually complicated. This is not surprising when you consider that Scorpio can be simultaneously generous and affectionate, violent and unpredictable; in their sunniest moods there is always a hint of an imminent change in the weather. Scorpios are deeply loyal to friends but are also intensely jealous and possessive. Scorpio cannot tolerate the thought that anyone they love might have a yearning, or even a simple yen, for anyone else. With them, it is usually all or nothing at all. Moderation, restraint, and certainly casual are not in Scorpio's emotional vocabulary.

Scorpio never forgets a kindness and will try to repay it handsomely. Conversely, they never forgive an injury and will wait years to get even. In fact, most of the time getting even isn’t enough- they  want vengeance. It is strictly not advisable to do harm to any Scorpion. They make a dangerous enemy, for they are as subtle and deadly as the symbol of their sign. Scorpios are a fierce competitor, though often they manage to conceal this from others. Scorpios file away pieces of information, facts, and names, and don’t hesitate to use what they know if the occasion arises. When they spot a weakness in a rival, they move in quickly for the kill.

Scorpios are adaptable, able quickly to channel their formidable energies into new paths and to embark on an entirely different career. Confronted with disaster, they will try to turn it into success. Practical and shrewd, Scorpio believes in tangible immediate goals, and their singleminded concentration on getting what they want is formidable. Clever with money, conservative about spending it, Scorpios have an excellent chance to amass wealth. In business, Scorpios tend to accomplish things first and announce them second. By the time an opponent is aware of a Scorpio's progress, it is a fait accompli. Scorpio nature makes them subject to obsessive drives that can be resistant to reason. Scorpios will dominate and control anyone who lets them. Suspicious and wary, they are reluctant to trust their heart to anyone. But once Scorpios do, they love deeply.

Too many astrologers, in describing the sign of Scorpio, forget to emphasize how loving, generous, kind, loyal, even gentle a Scorpio can be. Many idealists who adhere to high principles and are a great positive force for helping others are born under this zodiac sign. What all Scorpios have in common is intensity of feeling. Emotion not only rules, it characterizes them. Scorpios are
passionate in love, and passionate about everything in which they become involved: work, relationships, hobbies, causes. Scorpios are individuals painted in vivid colors; there is no such thing as a pastel Scorpio.