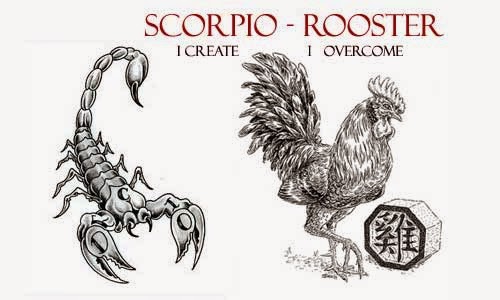 A steely ardor for living characterizes this combination. Scorpio, always mysterious and secretive, here encounters cockiness, bravura, and a love of what is exterior and apparent. Instead of causing conflict, the mélange engenders a simmering synergy and a kind of What Makes Sammy Run? dispatch.

Talent is no stranger to the Rooster born a Scorpio. This person usually has bushels of skills. Scorpio Roosters are idealists and, because of the crossing of Scorpio’s determination with the Rooster’s resilience, will suffer less from setbacks than many other people. The Scorpio Rooster’s story is invariably one of climbing precipitous summits followed by full fanny slides back down. The craggy chasms in which you sometimes find Scorpio Roosters flailing about seem not to ruffle their feathers. It’s amazing how they bounce back from sorrow, divorce, loss and human bankruptcies of
all sorts. These people seem fragile, almost brittle at times. But they are really solid and strong.

This subject wishes to appear supple and relaxed—cool—if you must. But scratch the surface of a Scorpio/Rooster and you will find instead a rare brand of rigid conservatism. The playboy or girl with the ready grin and the big fancy car is really not spendthrift or promiscuous in the least.

Scorpios are sexy people. But the Rooster Scorpio, although he puts up a good front, is not so sensual as he would have you think. He’s a bit of a frustrated Scorpio, who talks a big story but is not all that crazy about using his or her own precious body for lowly physical pleasures.

These people are direct. They blurt their desires and needs. They talk a lot and they keep a steady stream of complaints going as well. The Scorpio/Rooster sometimes feels victimized by others. He or she may gripe and blame more than is necessary. That sad tale about how Jimmy left you to marry Francine because she was such a siren is indeed regrettable. But weren’t you partly responsible? Are you sure,

Scorpio/Rooster, that Jimmy didn’t have his reasons? Were you not a bit quick to anger? Did you not ask for the moon and only give peanuts in return? Were you not excessively nervous and jittery at times? Come on, Scorpio Rooster, ‘fess up. You tend to feel overly sorry for yourself.

There is a streak of old-maidishness in the talented Scorpio Rooster. She likes everything in its place and has a place for everything. He is picky and has enormous respect for promptitude. This confirmed-bachelor trait is not always negative, however. The Scorpio Rooster adheres swimmingly to routine, and can run rings around laziness. The marriage of these two very particular signs makes this native choosy, persnickety even, but it also gives him faultless taste and pushes him out of
bed in the morning.

Roosters born in Scorpio are self-starters. They can drudge their way through all sorts of laborious mires and come up laughing. They are pretty near invincible, and if they do get discouraged, they fight depression by getting busy. Scorpios born in Rooster years personify the rugged individualist who, despite his eccentricities, manages to stay firmly put in the system.


Talk about ups and downs! The Scorpio/Rooster’s love life looks like the terrain in a war zone after a heavy bomb strike. These people are perfectionists. They are even Utopian. The muddy waters of casual passionate love affairs truly disturb their delicate senses. What does the Scorpio/Rooster want out of love? Permanency. Coziness. Everlasting fidelity. A marriage that works and keeps working—a love affair forever. It’s a big order, especially nowadays. As a result, many Scorpio/Roosters don’t stay involved too long. They see the weensiest flaw in a relationship as a gaping rent. And they leave. The Scorpio/Rooster does not want an imperfect love life. So sometimes he prefers to have none at all. He’d rather live in isolation than deal with murk.

Should you find yourself in love with a Scorpio/Rooster, behave. If you want to get and keep one of these punctilious creatures, it’s up to you to get your act together so he or she can admire and adore you. Once you have caught the Scorpio/Rooster, you will have to accept living according to some very scrupulous patterns that inevitably belong to this person’s existence. If he or she gets up at 3:00 A.M. to work on a diary, then you will probably be well advised to arrange your schedule accordingly.

Scorpio/Roosters like things to run their way. In return they give utter devotion and ruthless protection. They will fight for your rights as well as for theirs. But don’t ever betray them. Scorpio/Roosters do not forgive. They leave.


The homes of Scorpio/Roosters are epic places filled with authentic antiques and perfect wiring systems, and they boast every appliance ever seen by man. There may be a billiard room, too. The Scorpio/Rooster is a gay blade type, loves entertaining, and lives to be admired. He’ll let you drink his whiskey and eat all his pound cake as long as you remember to tell him how much you enjoyed his last TV show.

The Scorpio/Rooster is a loving and careful parent. He or she remembers everybody’s birthday and brings in circus acts and magicians for little Molly’s party. He or she will be the kind of parent who wants the kids to enjoy themselves while they are young. Scorpio/Roosters sometimes miss having children because of their hesitation to marry unless they find the perfect mate. But if they don’t have a family, they will regret it. Kids, with all their spontaneity and natural mirth, offer this rather stiff person the opportunity to relax with impunity.

The Scorpio/Rooster child will be easy to raise. He or she will probably excel in subjects requiring exactitude and accuracy. Also, this person will be popular with friends and favored by aunts and uncles for his or her fine academic performances. This girl or boy will no doubt enjoy sports, too, and do well in those athletic endeavors that smack of class and elegance, such as fencing, tennis and horseback riding.


Gifts abound in the nature of the Scorpio Rooster. He or she will be good at many different jobs. They like to undertake vast projects that demand personal involvement and self-discipline. Versatility and perseverance is the special province of the Scorpio/Rooster. She may be able to speak three languages. He will have won several medals for tennis tournaments and be a crackerjack painter, too. Scorpio/Rooster likes to surmount difficulty and only gets into a situation if he or she thinks it’s a winner.

Either “Employee” or “Boss” etched in the glass on their office doors will mean the same thing: Boss. This Scorpio doesn’t take orders gracefully unless he covets the job of the person giving the orders. He or she is a natural stickler and will drive him- or herself as hard as anybody. Scorpio/Roosters are also concretely creative. They come up with new ideas and carry them out.